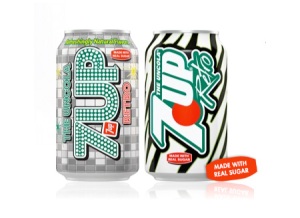 Looking again at retro beverages this week, Dr Pepper Snapple Group (DPSG)  announced they will be producing their own retro packaging ‘throwback’ soft drink.  For a limited time starting this month, 7up will undergo retro packaging and glass bottles to bring back a 1970s and 1980s feel.  Similar to the Pepsi Throwback, it will be substitute real sugar instead of high fructose corn syrup.

A question to look at in more detail based on this product launch:  Why would Dr Pepper Snapple Group launch a retro soft drink right now, and one that is not their core product?  Is there a stronger affinity/relationship between consumers and 7up, rather than Dr Pepper?  When one product is successful, it invites imitators trying to piggyback on the success of the original product.  DPSG may not be trying to piggyback on the Pepsi Throwback’s success, but seeing that there is a market demand with a retro Pepsi cola, they may be also be demand for a retro 7up soda.  The timing of this launch comes well after its publicity on the Celebrity Apprentice television show, and also seeing that Pepsi Throwback has become a regular product rather than just a limited time product.

While consumer loyalty to either 7up over Dr Pepper is a question, DPSG’s decision to launch a classic 7up may be more strategic placement than anything.  As Dr Pepper and Pepsi are both colas, releasing a retro Dr Pepper may indeed lead consumers to believe it is a copycat product.  7up on the other hand, is a lemon-lime soda, so there are slight areas of differentiation between Pepsi and 7up.  Consumers interested in picking up a cola will not need to choose between two retro products and for the same rationale lemon-lime category loyalists will not have to decide between Pepsi and 7up.  Furthermore, the lemon-lime soda category has been struggling with advertising and innovations the last few years, so for a classic product to be released is something refreshingly new.

A word of warning to DPSG is that not all retro products are successful.  While Pepsi Throwback and Mountain Dew Throwbacks were both launched at the same time, only Pepsi Throwback has survived to become a regular shelfed product.  The key point is that a retro product’s success ultimately depend on two things: 1) that the product has a strong historical relationship with the buying public and 2) the consumers truly like the older product better than the new one.  And as mentioned in the previous post, cannibalization should be a strong consideration for the manufacturer.  After all, if the real sugar retro 7up has strong consumer loyalty and is stands differentiated from the current 7up, why not make it a regular offering? 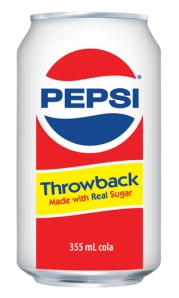 Regular readers of my blog may remember that I reported on Pepsi Throwback and Mountain Dew Throwback last year, but mainly as a American limited-time only beverage.  Well I was thirsty and went into a Shoppers Drug Mart a few weeks back and was surprised to notice that there was Pepsi Throwback here in Canada.  In addition to being a soft drink that was only released in the United States, I remember that the beverage being a few years old.

After some googling, it turns out that the Pepsi Throwback was made part of Pepsi’s permanent line-up because of their strong sales and recipe.  It was also launched in Canada early 2011.  Throwback tastes different from the current Pepsi cola in that it has no citric acid and uses real sugar, compared to High Fructose Corn Syrup in the “new” Pepsi.

Initial feedback has been great for Pepsi Throwback, but as my critiquing tendencies go, do they really need another permanent Pepsi?  It almost appears that they are trying to blanket-cover the calorie and sweetness spectra with their offerings.  Pepsi, Diet Pepsi, Pepsi Max, soon to be launched Pepsi Next, and now Pepsi Throwback.  How much cannibalization will occur?  The expanded line-up means some drinks within the portfolio gets less sales.  Pepsi should beware of what vitaminwater is doing in terms of having so many available options for a consumer to choose from.  vitaminwater’s consumers to this day still gravitate toward 5 flavors out of a possible 11 flavors, making more than half of them slow movers and hard for retailers to justify the shelf space.  This isn’t to say that having Pepsi available in 5 different options is a bad idea, but each of the 5 option must be unique to avoid duplicity.  Pepsi’s differentiation between Pepsi Cola, Diet Pepsi, Pepsi Max and even Throwback would be significant, but Pepsi Next…not so much in my opinion.

While I didn’t buy a Pepsi Throwback that day (settled for vitaminwater instead) I am still interested in finding out what it tastes like and how it compares to the new Pepsi.  Has anyone ran a taste test to try both, and care to give me your two cents?

I was scouring the news feeds for a topic of this week’s post and came across a BevNet.com review for a new Rockstar Energy drink – the Rockstar Energy Pink (link here).  Since you can go to the link I won’t elaborate on the review but go right to my topic.  I’ve never really been on board with all the different energy drinks on the market because this category seems overextended and past its peak, and the launch of this product confirms it.  The release of Pink indicates that a “Big 3” energy manufacturer is officially targeting female consumers.  Could it be that energy drinks predominately target males? Yes.  Could it be that there are only so many male consumers that are willing to drink energy drinks?  Could it be that since the energy drink category is maturing (growing, but no longer the double digit growth seen in years past) and manufacturers are looking elsewhere to sustain their growth?  Also yes.

Hence the launch of Rockstar Energy Pink, an energy drink that implies it’s a female energy drink.  The product’s packaging is pink, with no mention of “diet” or “females only”, and also comes in a 12oz (355ml) aluminum can compared to their other products in a 16oz (473ml) can.  Targeting female consumers aren’t new to the energy drink market nor any beverage market, but this product faces an uphill battle.

While Rockstar Energy is a known energy drink company, they are neither the top-selling producer (Red Bull) or second-top-selling producer (Monster Energy) in the category.  Not only are they fighting hard to get consumers to pick up a Rockstar Energy product versus the competition, they are now offering another option for consumers to choose within the Rockstar portfolio.  In the end, if Pink attracts female consumers to drink Rockstar, they have a winning product. If the product tanks, they might also be dragging one or two other Rockstar Energy products with them.  Retailers have limited space in their beverage aisles and coolers for products, so with a new product in the aisle something else will lose space.  Retailers may tell Rockstar that in return for supporting their new product, they must de-list one of their own existing products in order to make shelf space.   So if Rockstar is forced to take out one of their products to make space for Pink, logic would be to take out the slowest selling Rockstar SKU.

Despite the above-noted concerns, I believe this product has a chance to succeed.  While Rockstar Energy has seemingly flooded the marketplace with their products, this Rockstar Energy Pink advertises to a different audience and will also likely be placed in shelf space away from their regular energy drinks (likely to sit on the same shelf as Red Bull and Diet Red Bull based on packaging and 355ml size).  If their price point is comparable to Red Bull’s energy drinks, they may take some sales away from the leader while protecting their own sales.  And if this product is successful, you can be sure to see Monster Energy also come out with a product targeting female consumers as well.

Gatorade has recently launched their G Series product line, which offers sports drinks for the athlete before, during, and after their activity.  Advertising Age has some more information as well as the full size of the G Series image summary below (link here – article may require subscription to view).  The sports drinks manufacturer faced a dilemma as the sports beverage’s increased popularity propelled Gatorade into a mainstream beverage alternative and began alienating their target consumer – the athlete.  With the understanding that they were in an precarious position having their product appeal to the masses but driving away their target, Gatorade sought out to reformulate their beverage and market it again to the core consumer.  The solution is a three part G Series Prime, G Series Perform, and G Series Recover lineup, layered on top of a three segment G Series, G Series Fit, and G Series Pro.

The end result may end up confusing their consumers more than ever.  Who determines whether you are a regular athlete or a competitive athlete?  Does recreational competition count as a competitive athlete?  How does Gatorade’s distribution facilitate their new products – will G Series be offered everywhere while G Series Fit offered only in gyms, and G Series Pro only sold to sports teams?  Will the price points be identical for these three segments?  What about the flavor options?  At the end of all this, Gatorade may the one that loses.  Not only are they confusing their consumer, it’s a given that cannibalization will occur.

With a price differentiation strategy, they cannot price differentiate each segment too much, or else POWERade will end up appearing comparatively less expensive and be rewarded with the sale.  Not to mention, the price strategy is not always up to the manufacturer to decide, they can only suggest the retail price.  Lastly, the pricing itself may act as an indirect indicator that the G Series Pro is better and drive higher sales for this segment but block sales for G Series and G Series Fit.

In terms of distribution, will all three segments be offered in the same place?  It’s unlikely that all options will be available at a retailer, given the lineup and shelf space available for their beverages.  So this leads to limitations on where their products can be found – what if a ‘competitive athlete’ forgets to bring his G Series Pro Perform when he’s heading out to train, will he be able to find it at his local grocery store or will he have to buy it at a specialty retailer (if it can even be found)?

In my opinion, Gatorade as a sports drink became popular beyond athletes not only because of its taste and purpose, but also because of its image.  People that consume Gatorade want to give off the impression that they are an athlete and in shape.  The ‘in shape’ image is extremely important in today’s society, so even those that do not exercise may choose to leave their house in training gear and grab a Gatorade to drink.  Think of Underarmour and lululemon’s popularity that extends beyond the athlete and yoga performer.  It’s for those same reasons that Gatorade has gained everyday beverage consumption among athletes and non-athletes alike.

My prediction?  At least one of those three segments (G Series, G Series Fit, G Series Pro) will disappear from the market stemmed from slow sales, and the sales trends will indicate that consumers are choosing either the G Series or the G Series Pro.  We’ll just have to wait and see how it long it will take.

On vacation this week and only have limited computer/internet access.  Postings will start up next week.