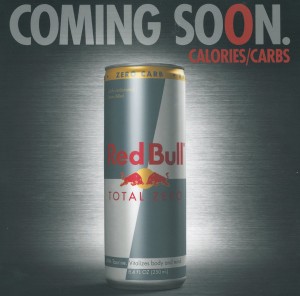 Red Bull is anticipated to launch Red Bull Total Zero this April in the U.S. – an energy drink formulated with no calories, carbohydrates, and sugar.  U.S. trademark and patent files indicate that the colors are silver and grey, with a yellow band across the top.  A pretty sleek looking can from my perspective.

The launch will come in the can size that Red Bull made popular (250ml) and likely retail for the same price as existing Red Bull products (Original and Sugar Free).  With only two products variations available and selling, Red Bull undoubtedly needed to innovate and come out with new products and re-gain their lost leadership position from Monster Energy.  Is Total Zero going to help them with that?  The latest innovation is a very safe line extension, capitalizing on existing energy drinkers that are concerned about calories and carbohydrates.  Red Bull is sticking to what they know best and using this to build upon their success.

Total Zero is a product that is very similar to what everyone has come to know and expect from Red Bull.  It is a product that many expect it to perform the same way as its other two beverages, but calorie-free and carbohydrate-free.  It will likely be shelved in the same cooler space as the 250ml Original and Sugar Free variety, making it less of a delineated extension (ie Red Bull Cola in the cola section, Red Bull Energy Shots at the cash register).  These factors give it a higher chance of success than their previous innovations.  However, the launch of Total Zero isn’t likely to gain a lot of additional shelf space in the cooler door, so the facings for Red Bull Original and Red Bull Sugar Free will have to be reduced.

While there may be some cannibalization with their existing products (expected), Red Bull is hoping to attract those drinkers that may have left for Monster, Rockstar, and Xyience because of the calorie-free option.  Since the growth of energy is slowly tapering off, the importance of converting a category shopper to a Red Bull shopper is even more important.  As long as they are buying your company’s products and not the competition’s, you at least keep their dollars within your organization.

Are there other product extensions or adjacencies that Red Bull can leverage?  Cola didn’t work and neither did energy shots.  There’s only so much space in the cooler’s energy door for Red Bull, so they will really need to look beyond that one section to drive growth.  Are there growth opportunities in the juice door, or the water area?  Or expand into confectionary offerings like Jolly Rancher and Jones Soda Co?

Total Zero’s launch makes the most sense for Red Bull because it’s a safe bet and should work very well with energy drinks, but Red Bull should also be thinking about where to go next beyond Total Zero.

2 thoughts on “Red Bull Total Zero: Sticking With What Works”