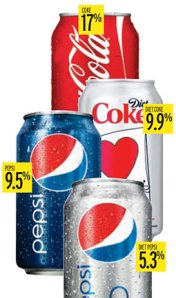 A few weeks ago, Beverage Digest posted the latest market share statistics for the US carbonated soft drinks (CSD) category and we found out that Pepsi had slipped to number 3 (see stats here). Industry analysts had predicted that this market share change was coming as Pepsi had lost share in the last few years, as Coca-Cola has stayed the course with their beverage unit and maintained marketing Diet Coke in traditional media (TV/print/radio) while Pepsi started promoting other beverages in traditional media, and invested in other forms of marketing

It seems that as Pepsi sought to maintain a balance beverage portfolio by promoting other beverages (such as Pepsi Max, Sierra Mist, Aquafina Plus10, Mtn Dew, Gatorade, etc) that they forgot to keep promoting Pepsi itself.  Their NFL sponsorship was recently changed from Pepsi to Pepsi Max, Superbowl advertisements followed the same course, and even the main TV commercials started promoting a Coke Zero vs. Pepsi Max cola war instead of focusing on Coca-Cola vs. Pepsi.

Was this the right decision for Pepsi – to focus on other beverages instead of their core product?  Despite Pepsi’s balanced portfolio making them more formidable to withstand declines in any one category if they promote other products, the CSD category is still the largest beverage category.  Even within the CSD category, promoting Pepsi Max, Mtn Dew, and Sierra Mist helps these brands gain traction and spread their risk if any one product sees slow sales.  However, CSDs as a category is in decline, and Pepsi has been declining more than the category.  And according to the Beverage Digest rankings, it’s not just Pepsi that lost market share, it’s also Diet Pepsi.  Your two core products are in decline, while your competitor’s two core product maintain market share in a declining market, meaning they now own a bigger share in the CSD category.  Even Sprite, another core product for Coca-Cola passed Diet Pepsi in the market share rankings.

Although this decline cannot be fully traced back to any one particular issue, I would answer that Pepsi’s decision to experiment  with their marketing and promote other brands was a bad decision.  The core of your business where you make the most money is still Pepsi and therefore you should be promoting Pepsi.  In the largest marketing venues, Pepsi should be promoted and not Pepsi Max.  Though whether they should allocate more spend at the expense of other brands is still questionable, promoting their core product more and through effective traditional media is a must. 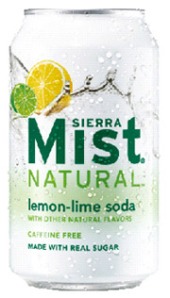 Since re-launching last September 2010 as Sierra Mist Natural, Pepsi’s lemon-lime soda has been gaining traction and experiencing double digit sales growth in the latest quarter.  Jennifer Cirillo from Beverage World has more details on the beverage’s resurgence (link here).  Sierra Mist Natural replaced high fructose corn syrup with natural sugar and four other ingredients, as well as featuring updated packaging.  As the runner-up to Sprite in the lemon-lime soda category, Sierra Mist Natural had lost 14% volume in the two years before updating their package and formula (according to Beverage Marketing Corporation Data).

Sierra Mist Natural’s senior brand manager, Carlos Saavedra, says that the the refreshed formula boosted sales as consumers were leaving the category due to the unhealthy perceptions.  The belief that soft drinks contain artificial flavoring and high amounts of sugar and calories has turned people off, and with a natural offering Sierra Mist Natural has regained lost consumers and attracted new ones.  Saavedra says, “We realized that we really had a great opportunity here to take a great-tasting product, make it natural and use that to give consumers a really strong reason to pick [Sierra Mist] off the shelf.”  Sierra Mist Natural has 100 calories and 25 grams of sugar per eight-ounce serving and is offered at the same price point as Sierra Mist.

I’m not certain that this growth generates any additional profit for Sierra Mist Natural.  If sales had declined 14% in prior years, double digit growth would only be returning it to expected levels for 2009 volume.  Factoring in the amount of money that was spent to re-brand and update the formula for Sierra Mist Natural, PepsiCo has to consider the cost that went into the beverage and how long it will take to pay back or recoup their investment.

BevWire is not convinced that this growth will last or continue at a double digit growth pace.  Normally a repackaging option, price decrease, or formula adjustment lifts volume sales for a short time period only.  Once consumers experience the change effect, they will likely go back to their regular purchase patterns.  An advertised price decrease or formula adjustment calls attention to consumers to try the product, but that may not build a lot of longevity.  And while feedback for natural flavored products is increasingly positive, there is still desire for the beverage to be produced in its original formula.  Case in point: Pepsi’s Throwback beverage series for their trademark Pepsi Cola and Mountain Dew.  Why would you need to return to your roots if the product itself is popular and successful?  If it were to attract consumers that grew up with the original product, but left the product when it changed the packaging or formula, would they come back for a retro product that is only available for a limited time?  Furthermore, what would happen after the retro beverage is no longer produced again?

Overall, this is a long term investment for the Sierra Mist Natural.  Though double-digit growth for two quarters is step in the right direction, other factors would definitely need to be considered.  If all else fails, Sierra Mist Natural could always release a retro edition of their beverage to stimulate sales.

Advertising Age published an article last week detailing the marketing investments of Coca-Cola, Pepsi, and Dr. Pepper Snapple Group (DPSG) in the lemon-line soda category (link here).  Until this was mentioned, I actually had not noticed that there really wasn’t much advertising around Sprite, Sierra Mist, and 7up in Canada.  Sprite always appeared to be advertising because of their partnership with the National Basketball Association, so it doesn’t seem like they had not advertised at all in the past few years.  No Sierra Mist advertising in Canada because of DPSG’s agreement with Pepsi, but 7up itself has not done any advertising in the last few years.  The article reports that marketing dollars for this beverage category had shrunk 80% and the money was being reallocated to other beverage categories such as enhanced waters, energy drinks, and sports drinks.

However, all this is about to change (or in Sprite’s case, has changed already).  Driven by consumer insight that clear sodas are a healthier alternative than colored sodas (untrue, by the way), all three major beverage companies are reinvesting marketing dollars into the category.  In terms of product innovation, Sprite launched Sprite Green in 2009, while Sierra Mist will introduce Sierra Mist Natural later this year for the US.  Both drinks are naturally sweetened beverages (Sprite with Truvia and Sierra Mist Natural with sugar) to keep in line with the consumer trends searching for healthier alternatives.  7up had already reformulated to contain 100% all natural flavors, removing artificial flavors and preservatives in 2006.

Sprite has also launched a global integrated marketing campaign titled “The Spark” which began with Drake’s commercial seen above.  Sprite’s marketing campaign includes a music project as well as a film project, and will be marketed through TV, out-of-home, online, and mobile media placements.  The music project gives teens the ability to mix their own music and save it as ringtones or send to their friends, while the film project encourages teens to create their own mini-film through choosing the setting, plot, characters, and ending.  All these efforts tie in with their theme to “spark” creativity and sharing it with others. 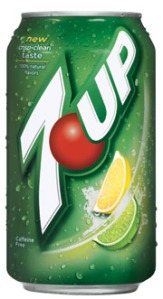 What about 7up?  Since Sierra Mist cannot be sold in Canada, consumers’ lemon-lime soda options are limited to Sprite, 7up, or private label brands.  Are there any product or package innovations coming from 7up?  Advertising Age indicated that 7up will be stepping up their marketing and will be spending $25 million in these last four months, but no idea if that translates over into the Canadian market.  I’m curious to see what 7up will do because there may not be a lot of leverage to build upon these remaining 4 months.  Holidays are normally a ramp-up for beverages, but Christmas usually sees Coca-Cola and Pepsi promoting their own core brands.  And with 8 months of the year past already without much brand exposure, what will 7up be spending their $25 million on the remainder of the year?  According to Nielsen market share data, 7up held nearly 6% market share in 2009, while Sprite held less than 4% during the same time period.  Despite the US market being larger, shouldn’t 7up invest more advertising into Canada to protect and increase their market share points since there is less competition here?  If nothing is done, 7up stands to not only lose market share to Sprite, but possibly its market leader status.