BevWire recently learned that Canada Dry’s Tonic Water is being delisted or discontinued.  A store clerk at the local supermarket said that they can no longer order in this product because it wasn’t being made anymore.  This is really interesting news because Orangina was taken off cold channel shelves earlier this month, and now another product from this company is being taken away.

BevWire understands that some companies are cutting down the number of SKUs they bring to the market, but why cut something when it actually sells?  Is this brought about because private label tonic water is the number 1 seller in the market, while Schweppes is number 2?  Quite possibly.  Tonic water is a generic mixer with other beverages so the margins may not be as high.  And since Canada Dry is not in the top 2, there is no point to remain in the market.  Furthermore, customers may believe there is little or no differentiation between Canada Dry’s Tonic Water and a private label tonic water, and thus weaken the product’s sales.  If Canada Dry is indeed exiting tonic water, they will likely focus their efforts on what works best for them – Ginger Ale, Club Soda, and their recently launched Green Tea Ginger Ale.

BevWire has found all the news articles and press releases about Pepsi launching Aquafina Plus 10 in Canada and the portions of the release are pasted below:

“Our hydration portfolio, including Aquafina Plus+(R) vitamin-enhanced water, has seen explosive growth in Canada, and the Aquafina Plus Vitamins 10 Cal brand is going to further that leadership position. Being the first to offer a great-tasting, low-calorie option with a natural sweetener is a big deal, and we are excited about sharing it with health-conscious Canadians,” added Ms Reichert.

With the release of Aquafina Plus 10 in Canada and vitaminwater10 still only available in the United States, Aquafina Plus does stand to gain some market share with its healthier beverage.  Still, if vitaminwater10 was ultimately released into Canada, BevWire believes that the leadership position will belong to vitaminwater.

New Leaf tea was introduced into the Canadian market in the past few years.  BevWire recently took notice, and realized that something was off with their packaging.

If there are any sales figures that BevWire can obtain, New Leaf teas most likely will exist as a blip on the radar (if they even show up at all).  However, if the packaging was refreshed to show the tea in their correct glass bottles,  sales may very well increase (and still show up as a blip on the radar). 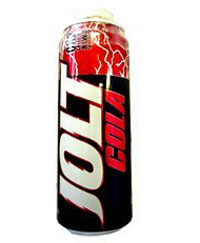 Is this going to be the end of Jolt Cola, or will a beverage company step in and purchase the brand?  In a saturated energy drink market, it may not attract a lot of suitors.  However, they may be enough interest out there to re-launch the beverage if the bankruptcy filing succeeds.  So Jolt Cola addicts, go out and buy Jolt Cola while you still can!